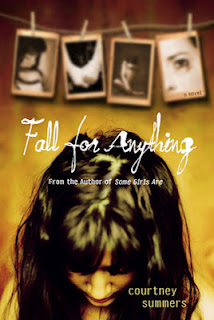 Author: Courtney Summers
Series: Stand Alone
Genres: Realistic, Death and Dying, Contemporary, Young Adult
Publisher: St. Martins Griffin
Released: 21 December 2010
Summary: via goodreads.com When Eddie Reeves’s father commits suicide her life is consumed by the nagging question of why? Why when he was a legendary photographer and a brilliant teacher? Why when he seemed to find inspiration in everything he saw? And, most important, why when he had a daughter who loved him more than anyone else in the world? When she meets Culler Evans, a former student of her father’s and a photographer himself, an instant and dangerous attraction begins. Culler seems to know more about her father than she does and could possibly hold the key to the mystery surrounding his death. But Eddie’s vulnerability has weakened her and Culler Evans is getting too close. Her need for the truth keeps her hanging on...but are some questions better left unanswered?
My Review: For some reason I'm attracted to sad books, which is strange because I'm not a big fan of being sad, but whatever, there is it. Maybe it's that I like to look at grief from different angles? I don't know. Okay, anyways Fall for Anything was kind of a..strange book. I've read a lot of books where one of the parents dies and this one was different and yet the same as others. Different in that it is solely focused on Eddie and Milo, the same in that the parent left living becomes an empty shell and no longer cares about the child, their whereabouts, etc. and the same in that a third party who the protagonist hates enters and makes a muck of things. However, what was different is how Summers captured grief. This book literally felt like a weight was resting on my chest. It was that intense. The way that Eddie is constantly feeling and trying to understand things weighs you down as a reader, which was surprising and completely unexpected.
There is just something about Fall for Anything that insists on being read thoroughly. Although Eddie isn't necessarily likeable, I found myself at two in the morning wondering what would happen between her and the two love interests. What I also enjoyed was how much Summers really gets into Eddies head. I felt like I was living this story while I was reading it. Fall for Anything definitely sucks you in. The only really big problem that I had (besides the fact that the F word was dropped probably three times per page – annoyed.) was that Milo seemed so much older, and yet would act so young at the same time. I wish that I could have seen more inside Milo's head. There were a lot of times where I kept wondering what the heck that boy was thinking, and why he felt so inclined to do what he did. What were his motivators? Was it love? Was it fear?
Fall for Anything is one of those books where you come out the other end feeling differently about things, whether it's a good different or a bad different is entirely up to you, but you do, definitely, feel different.  That's the real reason this is getting a four, because rarely do YA books make you feel and question this much afterwards.

Email ThisBlogThis!Share to TwitterShare to FacebookShare to Pinterest
Labels: Courtney Summers, Fall for Anything, Four Records