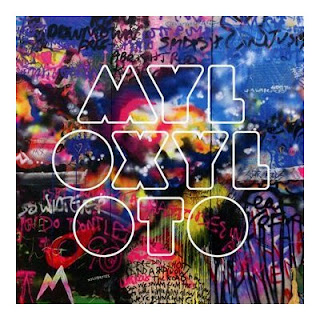 Album: Mylo Xyloto
Artist: Coldplay
Genre: Alternative Rock
Label: Parlophone
Released: 24 October 2011
Did you know that Guy Berryman loves eighties music?  Did you also know that he is bassist of Coldplay?  Well, I think that contributed a lot of the sound of Mylo Xyloto.

In years past Coldplay have messed with their sound (no two albums sound the same.) and I have to admit, every single time they release a new album the same thing happens.  I hate it.  Seriously, I think.  “WTF you guys??  Why do you insist on doing this to me?? Ugh.”  And then I take a step back, and think.  “Okay, I knew that this was coming, don’t think of it as a Coldplay album, think of it as a ‘whatever’ album.”

Sometimes it takes a while for me to really get on board with the Coldplay train.  I mean, Viva la Vida or Death and All His Friends  is one of my most favorite albums of all time.

How do you not love that song.  It’s so, words cannot describe.

Last winter during finals week a friend of mine had this playing in his car on the way to campus, and that was when my feelings changed.

I mean, can you imagine what hearing this track would do to you if you were listening to this after kicking trash on a Bio final?

It would feel like a nice blast of freaking sunshine instead of the gray snowy day that it was.  That’s how you would feel: complete exhilaration (at least I did).  That was the hook, like the first line of a novel, that song hooked me in.  I went home and watched the video for Paradise:
And seriously, if you don’t fall in love a little bit after watching that, then venture with the Scarecrow and Lion and find your heart.

Okay, sorry, snarky is invading.  With Hurts Like Heaven hooking me in, I was ready to make the full fledged jump into Mylo Xyloto (months after it was released.  I’m nothing if not a little behind the times . . .) and was a little more prepared (hint: I hadn’t been playing Viva on repeat for the past six weeks, like I had the first time I tried to listen to Mylo.) and guess what?


This album sort of blew my freaking mind.  Just try and not dance to this song.  I dare you.