The Raft **warning: minor spoilers ahead* 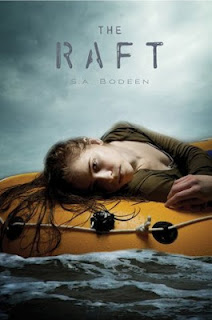 Author: S.A. Bodeen
Series: Stand Alone
Genres: Survivalist, Young Adult
Publisher: Feiwel and Friends
Released: 21 August 2012
Summary: courtesy of goodreads.com Robie is an experienced traveler. She’s taken the flight from Honolulu to the Midway Atoll, a group of Pacific islands where her parents live, many times. When she has to get to Midway in a hurry after a visit with her aunt in Hawaii, she gets on the next cargo flight at the last minute. She knows the pilot, but on this flight, there’s a new co-pilot named Max. All systems are go until a storm hits during the flight. The only passenger, Robie doesn’t panic until the engine suddenly cuts out and Max shouts at her to put on a life jacket. They are over miles of Pacific Ocean. She sees Max struggle with a raft.
And then . . . she’s in the water. Fighting for her life. Max pulls her onto the raft, and that’s when the real terror begins. They have no water. Their only food is a bag of Skittles. There are sharks. There is an island. But there’s no sign of help on the way.
My Review:  I don’t usually hate books, as a matter of fact I consider myself to be a major book lover, but . . . I really hated this book.  The Raft has one of the most misleading blurbs I have ever seen.  I would dissect it, but I think that would be a little too much snarky on a Thursday.  Let’s just say: Robie is NOT an experienced traveler.  And it is that once sentence: “Robie is an experienced traveler” that ruined this novel for me.
So how can you still give it a two?  Well, let me explain.  Robie was annoying from an adult point of view, but to a fifteen year old (how old Robie is in the book) she may be slightly more identifiable.  I can say with honesty that some of the things she does (really long explanations about things I don’t care about – like freaking birds) were incessantly annoying, but her fight for survival, although filled with massive amounts of stupidity, was engrossing.
I mean seriously, what “experienced traveler” doesn’t read the freaking handbook to the raft that she is stuck on.  What “experience traveler” doesn’t check in for her flight?  What “experienced traveler” forgets to zip up her bag and ends up dropping the remaining food into the ocean.  What “experienced traveler” that is literally starving, finds food and then won’t eat it because she has too much “heart”.  What “experienced traveler” doesn’t check her flares?
I smacked myself in the face a lot while reading this book because it was an endless, “seriously??” moment.  There were so many things that seemed to be poorly researched (with the exception of birds, so many birds).  I was really looking forward to a survivalist story about a girl who kicked some serious butt, and knew how to, you know . . . survive.  Like I said: a fifteen year old may like this, and I feel like it would appeal to both guys and girls, but the more I think about it, the more I realize just how much I didn’t like it.  It had me at the edge of my seat, I’ll admit, I couldn’t put this book down, and it literally flies by, I would be surprised if you didn’t read it in one sitting, and I did think about what I would do if I was in the same situation as Robie (hint: I would zip up the bag with the food in it, AND read instructions even though I’m not an “experienced traveler”) but, the more I think about it the more I am bothered by it.  And the big "spoiler" by the end.  I can't even discuss it, but seriously?? seriously?!
Whoever wrote the blurb for this book should probably be fired.  Completely misleading, and the honest reason why I detested this book so much. I mean if they had said, “Robie has made the trip from Honolulu to Midway Atoll hundreds of times.” instead and I probably wouldn't be so bothered by this thing.  Just saying, don’t call someone an “experienced traveler” when they aren’t.  It’s called lying, and it’s rude.